Disclaimer: This site does not store any files on its server. All contents are provided by non-affiliated third parties.
report 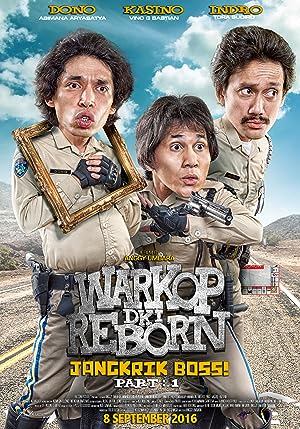 Dono (Abimana Aryasatya), Kasino (Vino G. Bastian) and Indro (Tora Sudiro) are back in action amid the bustling city of Jakarta. Once again, they play the roles of a group of officers employed by a private institution, CHIPS (A Great Way to Overcome Social Issues). Even though they are passionate about serving the community, they also continue to cause problems because of their silly and funny actions. Of course, this means they are constantly watched by a lot of people, including their Boss, who then brings Sophie, a professional and beautiful CHIPS member from the headquarter in France to help the trio in catching street thugs. Modern scenes of slapstick and satire natures will get the audience rolling in laughter throughout the duration of the film, and we will gain a new appreciation for classic WARKOP DKI features. The film is supported by a star-studded cast, including the Legendary Indro Warkop, Ence Bagus, Hannah Al Rashid, Fazura, Nikita Mirzani, Arie Kriting, Tarzan, Agus Kuncoro, Ge Pamungkas, Mongol Stres, Fico Fachriza, Henky Solaiman, Ingrid Widjarnarko, Temon, Fatih Unru, Asep Suaji, McDanny, Bintang Timur, Bene Rajagukguk, Yuda Keling, Arief Didu, Gita Butar Butar, Mudy Tailor, Ari Tulang and many others.